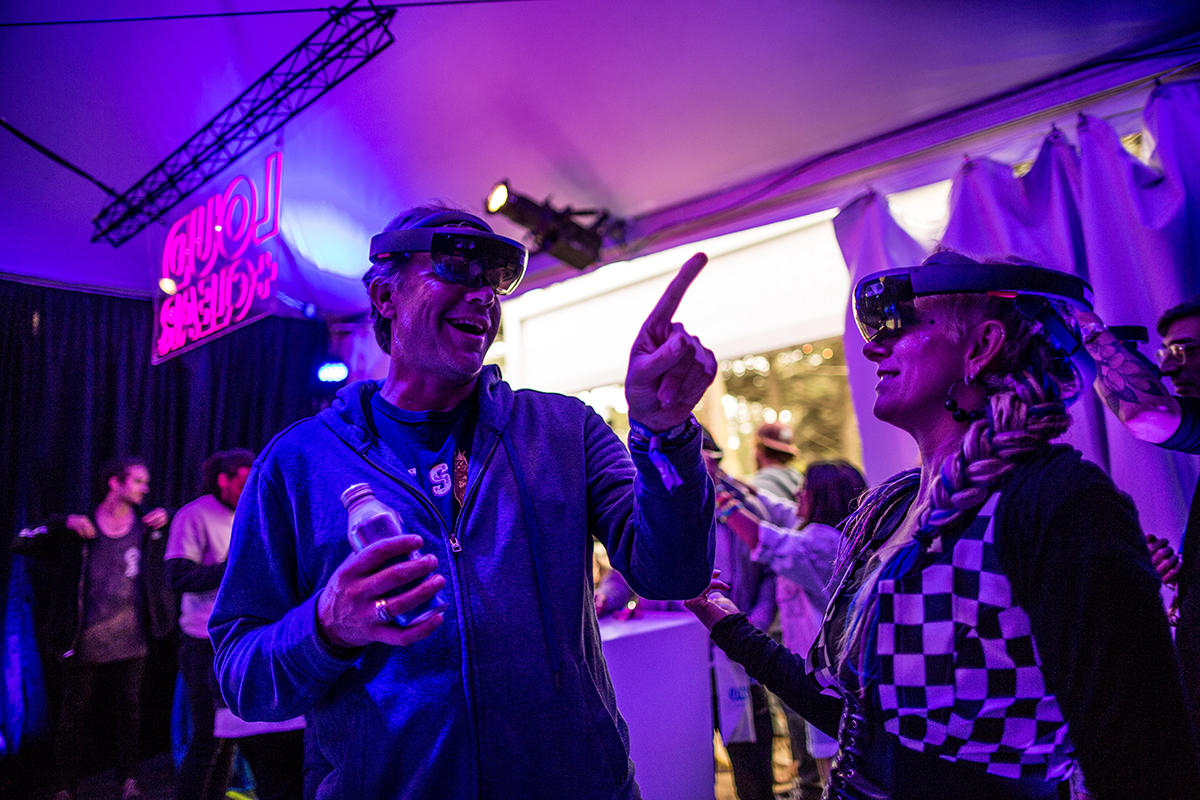 "Hightened Reality" Experience at Outside Lands

The cannabis industry is booming and blooming as an increasing number of states are passing laws allowing for medicinal and adult recreational use of their products. August 9, 2019 marked the first time that cannabis was legally sold at a major American music festival. The Outside Lands music festival, held in Golden Gate Park in San Francisco and attended by over 200,000, created a special Grass Lands area which contained information booths, stages and 28 different cannabis vendors.

Enklu Productions was featured at the heart of this historic occasion

Enklu partnered with Loud+Clear, a live resin sauce vape cartridge line by AbsoluteXtracts (ABX) a wholly-owned CannaCraft, Inc. brand, to produce the first ever augmented reality experience at both Grass Lands and Outside Lands. This ground-breaking experiential and educational marketing experience, called Hightened Reality by Loud+Clear was a very popular attraction which welcomed festival goers “into the next dimension.”

"Enklu's social reality experience drew consistent crowds throughout the show - we were one of the most popular booths in Grass Lands!" - Melanie King, Director of Field Marketing, CannaCraft

The gateway to this dimension was a tent located right in the middle of the action of Grass Lands. We placed two augmented reality mirrors, or Enklu Reveals, outside of the tent on either side of the door. These are interactive displays that generate real-time reflections of mixed reality worlds. They attracted passersby who were delighted to see themselves adorned with a set of dynamic dancing rainbow or fiery wings and a crown of cannabis leaves. The Reveal also had the Loud+Clear, ABX and Enklu logos placed to help visitors remember later where they had so much fun.

Once inside the tent, visitors were fitted with Microsoft HoloLenses and released into an immersive social reality experience custom created by Enklu, promoted as a “a magical, mind-bending journey through our universe.” We called it social reality as these experiences are best enjoyed and explored together to create lasting memories.

Our mission was to represent the Loud+Clear line by AbsoluteXtracts in augmented reality, with a side-dish of WOW

And what a fun mission it was. Our Lead Producer Ganga Baird and I came up with many of the concepts one day while in the car reading about Loud+Clear on the ABX website. We realized we could use different particle effects (aka sparkles) to represent each product, and could indicate if they were uplifting or mellowing by directing the effects accordingly. So, the uplifting and euphoric Blue City Diesel hybrid would be represented by bright blue and yellow block shapes reaching upward like a crisp and clear city skyline at sunrise. The relaxing and chill Creme Brûlée would be represented by a mellow golden pulsing orb with downward flowing particles, and so on. In addition to the symbolic particle and shape representations, visitors could display written descriptions for each strain using gaze navigation controls. Providing both visual and written information would help ensure that cannabis consumers were making informed choices about the products.

These effects were placed around the tent, hovering in holographic form, directly above a real-world display of the corresponding product line. As visitors engaged with the experience, they could interact with the particles, each of which had its own effect like particle attraction, acceleration or extra sparkle. The whole collection was placed into a scene surrounded by bright colored alien looking foliage. As a finale to the experience, we added one of our signature translucent sparkling guardian creatures. A gentle green gorilla was sitting on the ground repeatedly munching away at some tasty jungle treats. What Loud+Clear strain was he representing? Chillaxing Gorilla Snacks, of course!

Once on site, the team realized that the flow through the space as laid out by our hosts was not optimized for visitors to purchase products on their way out of the experience. It was decided to make some changes to the physical booth layout which also meant adjustments to the digital experience. Thanks to our easy-to-use, real-time collaborative software, Enklu Cloud, we were able to quickly adapt to the changes and fine-tune the placement of digital assets to match the new layout. In addition, our friends at CannaCraft were pleased that we were one of the few tents that had lines of people waiting to get in. Even though most folks didn’t wait more than 5 minutes, it meant that people knew there was something exciting to see inside of the tent!

"We were particularly impressed with how Enklu was able to optimize throughput and user experience via live content updates throughout the show.” - Melanie King, Director of Field Marketing, CannaCraft

A lot of people today have become frustrated with the constant barrage of brands and advertising, on every screen, app and bus that passes by. This is particularly true of the Burning Man community that I've been immersed in for the previous 20+ years. I’ve been contemplating this with my career transition and working on projects like this one.

What I realized is that everything is more fun with holograms. The experiences are beautiful, awe-inspiring, provide helpful information for consumers and create lasting memories. And, one of the great things about holograms, is that no mind altering substances are required to have an out of this world experience!