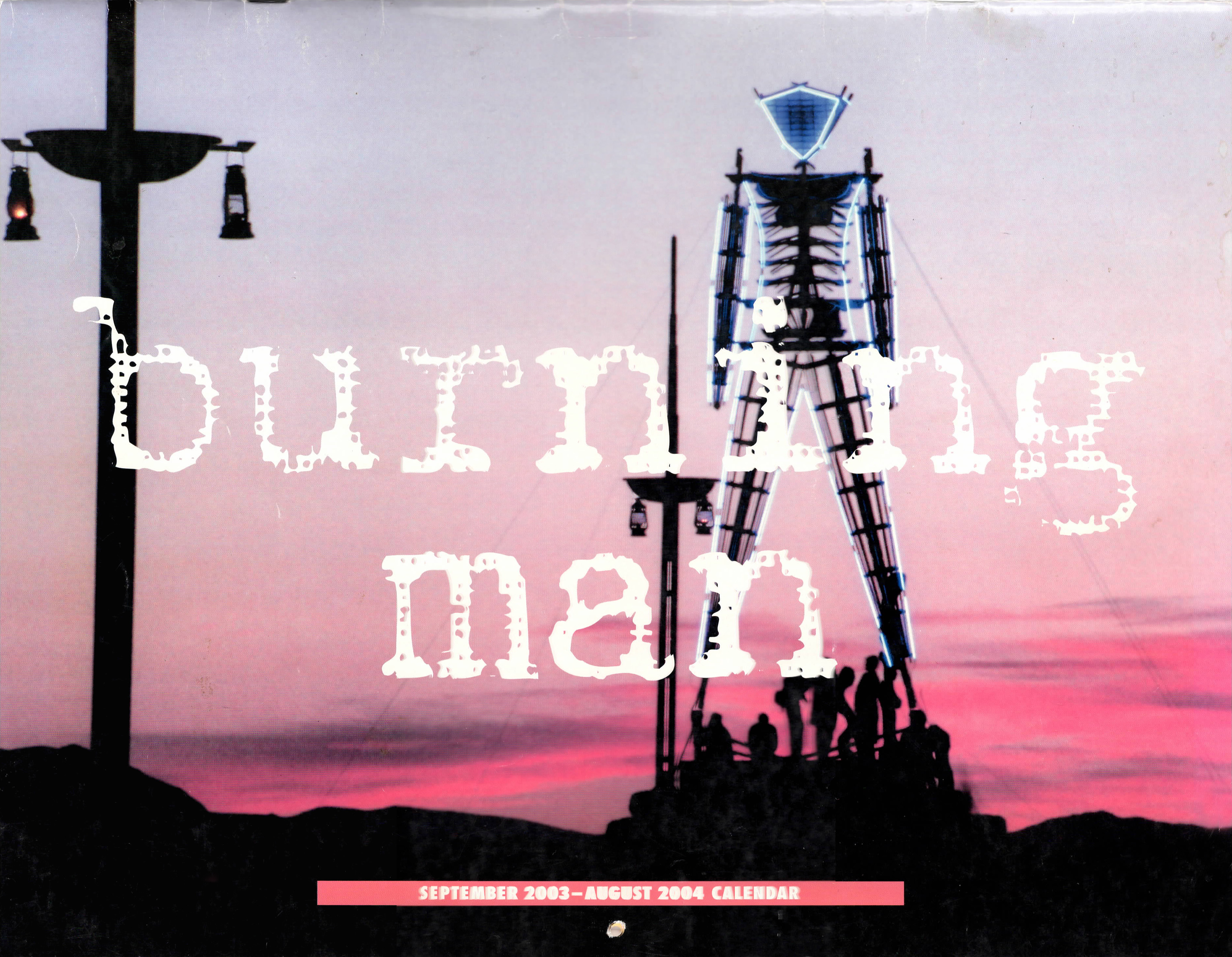 In 2003 Burning Man asked me to help produce our first ever official printed calendar. After spending several years lovingly and painstakingly telling the story of Burning Man through my own photography and imagery projects via the web, it was quite moving to learn that I had earned the trust of the organization as one of its visual storytellers.

Those were the early years of digital photography (way before Flickr, Facebook or smartphones), which happened to coincide with the rapid growth of the event in BRC. Numerous people had approached the organization about creating a Burning Man Calendar of their own, usually to sell as camp or project fundraisers. They were all turned down.

After careful consideration, it was decided that if produced carefully and under close guidance, a calendar could be a storytelling platform that helped the mission to spread Burner culture around the world. It became evident that if anyone was going to produce the official Burning Man calendar, it should be Burning Man. Sounds obvious, but this was a big step to take for a group committed to the principle of "Decommodification" and which did not produce any products to sell, not even t-shirts. That was when I was asked to help with the project, and another dimension of my moniker CG was born: CalendarGirl.

I produced the very first calendar with Mike “Gomonk” Fusello. A graphic designer during the day, he was also a part of the Placement Team, and had a thing for carefully arranging the orange safety cones that block the roads leading into Center Camp. I was asked to drive this project because of my respectful and thoughtful handling of the images, photographers and content.

The calendar needed to positively reflect on the event and culture. What if this was the one exposure to Burning Man culture that someone ever had? This couldn't be presented in a traditional calendar format with 12 images and 12 month grids, like the one you might get for free from your dentist. This was partly because there are so many gorgeous photos and projects to include, and also because we didn’t want to “feature” any one particular photographer or artist, when there are so many talented and exciting contributors in the community.

It was decided to make a “Burn Year” calendar, which started on the month of September and went through to the following August. Let’s face it: Burning Man is the biggest holiday of the year for many Burners, and our annual cycles tend to revolve more around our trip to the playa than anything else. We also wanted to avoid including recognizable faces, except in a few very rare instances. This was to respect the privacy of our attendees and to make sure that we didn’t make people “Sorta Famous at Burning Man.”

We may have pushed our desire for our calendar to be different a bit too far. The first design was a staggered grid of days of the week and images. This met the goal of not being conformist, but we were told it was a bit of a challenge to use for actual planning purposes.

The calendar was filled with tidbits of trivia from culturally relevant history. This is when I learned about important counter-culture events like Bicycle Day, which I had zero knowledge of previously. Also included were various countdown markers and preparatory reminders to get ready for Burning Man. Somewhere in that process, I created a new holiday, the Burnal Equinox, which marks the midpoint between Burns and has become an annual community event here in San Francisco.

The first calendar was produced back when the image collection consisted of a cabinet full of CDs and binders of slides at the back of the office. Reviewing and selecting images was an epic project in itself, let alone prepping them for press. It definitely took a few all-nighters at the office to get it done.

On one particularly late and memorable night, there was a 2 am phone call with Larry Harvey, who was traveling in London and wanted to see if three photos of men spinning Zachary Coffin’s Rock Spinner, taken by our Regional Contact, Yomi, could be included as a triptych. This would have been fine, except that one man was naked. Definitely naked. Definitely a man. Definitely a frontal view of a naked man. I pointed out that this was contrary to the guidelines that had just established a few weeks earlier. “Penis, Larry. Penis, Larry? PENIS? LARRY!” I said loudly into the speaker phone to my new boss. His response? “Yes, well that’s true, but can’t you, you know… make it smaller somehow?”

Those words were still echoing in my ears weeks later in the middle of the night as I zoomed in close with Photoshop, carefully touching up shadows and working to you know… make it smaller, and wondering what had become of my life and whether this foreshadowed crazy things to come?

Once printed, we had no idea if people would buy this calendar, and since it was created for our “outsider” community to enjoy, it wasn't going to be seen on the shelves of any major bookstores any time soon. It was decided to sell them through the online marketplace, at walk-up ticket outlets (back when we still had them) in San Francisco and Reno, and at a few select stops along the way to the playa in Nevada.

Deep and heartfelt gratitude to all the photographers, artists, camps, mutant vehicle owners, regional contacts, performers, artifact creators and other contributors to the project, each of whom gave permission for their work to be included and was thoroughly credited in the project and sent copies of the final product. You can learn more about the nuances and full history of this project in this post on the Burning Man journal.