Pushed back from the planned opening of Monday morning at midnight, the much-anticipated Infinite Playa multiverse finally opened at noon on Friday during the week of virtual Burning Man 2020. After having a fantastic time, synchronistic connections, and hilarious adventures on several of the other multiverse platforms, I was eager to check it out.

The Infinite Playa featured near photo-realistic, beautiful, high-quality animation renderings of a version of Black Rock City. I don’t know if it runs on an underlying Unity or Unreal game engine, but it was obvious some serious resources, and MMORPG development experience, was behind this multiverse project. With pay-to-play prices starting at $10 for 2 hours or up to $150 for 40 hours, this platform was the priciest multiverse on offer during the week.

Prior to its interactive opening on Friday, the Infinite Playa had a watch-only version where visitors could click on brief descriptions of featured artworks and camps. It also showcased a stellar lineup on the Virtual Mushroom Stage, and other talks, performances, and DJ sets as video streams which you could engage with directly via Twitch or later from inside the Infinite Playa as those events were happening.

Admittedly, I probably ate up a full hour of playtime just selecting and customizing features for my in-game avatar, and even then wasn’t totally happy with it. There were a lot of detailed options to choose from. Who knew it could be so hard to decide what kind of nose, lips and chin you want? Despite that level of granularity for customization, this multiverse like many others, did not have a good option for replicating the purple dreadlocks I have IRL. There were multi colored tribal braids though, so I went with those.

The Infinite Playa platform had a fair number of fashion options and accessories like gloves and jewelry to choose from. I was glad to find a pair of big black boots, which admittedly are one of my staples for both playa wear and in real life too. I did not love most of the clothing options though, so I decided to go with a black corset, thong and boots outfit. A choice I would be glad I made later, as I spent hours watching the shapely tush of my avatar trotting all over this virtual Black Rock City.

After the initial selection process there were no mechanics for undoing some selections, nor to go back and update my avatar later, so unfortunately my avatar ended up with some slightly strange purple eyebrows to complete the outfit. Regardless, the choice in skimpy outfit and muscular tush was appreciated by a friend in New York who I was playing with.

Even though we were playing the game together, and often exploring and within sight of each other, this was the least connective of the multiverses that I experienced during the week of Burning Man. The in-game player-to-player communications were not functioning for voice or text chatting. Fortunately this friend and I communicate regularly through Signal app, so we used that as a supplemental chat window running outside of the game.

That workaround made the gameplay a bit more cumbersome as I had to free up the mouse and cursor from the main window each time we wanted to communicate, but we made it work. It also meant that we were not meeting any other players while exploring the Infinite Playa. Occasionally another avatar would come up and sort of dance around in front of my avatar for a moment, almost as if to say “Hi! Nice butt!” before running off in another direction.

Speaking of running, there was a lot of it, at least for my avatar. The Infinite Playa multiverse had fairly realistic exploration mechanics and physics effects in the game engine. Much like on the real playa, you have to walk (or in this case run) to explore by foot. There were no flying or teleportation shortcuts like were found in the BRCvr multiverse. My avatar had a great workout while running around BRC, meanwhile I was sitting on my butt while looking at my avatar’s derriere all day long.

We had seen most of what there was to see after about two hours of roaming this virtual Black Rock City, the open playa art installations, and catching a few performances piped into various display screens and stages with fake crowds. At that point, my friend texted “Climb mushroom thing?” He had mentioned that earlier, but I thought he was kidding. He was not.

Apparently there was more to a featured art installation “The Mushroom”, which I later learned was created by my friend, the artist Android Jones, and fungi legend Paul Stamets. It contained The Mushroom Stage, a huge slide and a dancing mushroom mutant vehicle, and was surrounded by a collection of mushrooms of various heights and colors. If you looked closely enough and followed some big purple arrows, you discovered that two clusters of massive mushrooms extending out from the main piece were placed in roughly ascending height progression, and they wrapped up and around to provide a funky fungi staircase towards an elevated platform. Ok, I thought. “Let the games begin.”

At first, I wasn’t sure if it was meant to be climbable, as until then, we had mostly just run around and looked at stuff, and there weren’t really any instructions for what else to do. Turns out to get to the next level of Burning Man the Infinite Playa experience required a lot of finesse, patience, and in our case, a lot of swearing. Using a combination of running (the W key) and jumping (Space Bar) and various turns and positioning, we were able to incrementally eek our way up the mushrooms to reach the main platform. This was after many experimental moves, many missed jumps, many falls which dumped each of us back to the beginning at different times, and several bathroom and snack breaks.

At some point, a little frustrated and just needing a change, we took a break. By then, the platform (and our worlds IRL) had evolved to be nighttime. It was cool to check out the installations, camps and vehicles for a bit. Some had illuminated night time elements, some were just darker versions of what we had seen during the day.

Before too long though, the mushrooms were calling us back. We had unfinished business with them, and they were now beautifully illuminated in the sunset lighting. Hours later, my friend and I were still hammering away, we had figured out how to (mostly) successfully climb the two main rises from the ground. I had climbed on all the mushrooms below and inside the structure just in case there was a hidden easter egg or shortcut. Now we were trying to climb the last ascension which was made of small mushrooms at extreme angles which wrapped up from the middle platform to yet another elevated perch at the very top.

For many hours now, it was no longer about being at Burning Man. It was all about conquering and getting high on those damn mushrooms. I was sweating. I was swearing. My steering and jumping fingers were sore. My friend had re-upped his play time through another purchase for more platform time. “This is exactly how kids get sucked into games for days, and how the game developers get your money” a voice said inside my head. But I didn’t care, we were beyond reason, we were on a mission.

Eventually after a lot more head pounding, falls, starting over, and swearing, my friend made it to the top. He sent me a picture to celebrate his glory. I was like “That is it?” After all that work, I felt like we/he deserved a medal of some sort, or 1 million Burner points to some imaginary multiverse account somewhere.

It was only then when I realized that his screen was showing him keyboard commands. Apparently they showed up for him at some point and he couldn’t turn them off. Thank goodness I was playing with him or I would have missed most of the adventure we were on all afternoon. He finally, after trying to figure it out all day, managed to jump down the slide off the backend. Apparently it was also pretty uneventful as a payoff.

I’m not usually a quitter, but at that point, we decided to call it a day. We had been climbing those mushrooms for many hours, right during the prime time of Friday of the virtual burn week. Even though I didn’t reach the top, after that day, I think I can definitely call myself a gamer now. I’m sure the next time I talk to my friend Android and tell him his mushroom creation kicked my virtual avatars shapely butt all day long until I gave up, he will tell me there was some secret way to get all the way to the top which could have saved me hours.

After trying just one more time (of course) it was time to go. I had been checking out many multiverse experiences to see what they had to offer, but also it was my chance to connect with people and participate in Burning Man, not to spend time and money on a video game trying to defeat gravity with my keyboard. Besides, I had to go change into some fancy headgear for a planned dive with some other friends into the Sparkleverse that evening, and also I knew I would be hanging out with even more friends for hours later that night in BRCvr. So many multiverses, so little time? 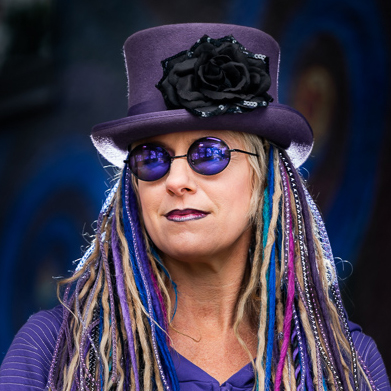